With Valentine's day this week, I've been thinking about a love that is so much more than easily spoken words or roses or candy hearts. We need to keep this in mind - that the cross of Christ is the greatest manifestation of love this world has ever seen. His blood was poured out for us. As Jesus said, "greater love has no man than this, that he lay down his life for his friends." I've been challenged to contrast that with my own life, because I know I'm not living that way.

I was just listening to part of a message by Francis Chan the other day, in which he said something about the fact that our generation is getting some of the best, most biblical teaching that has been around for a long time. He was concerned with our propensity to respond with "Wow, that was such a convicting message!" But as to what we're going to do about it? "Well, I'm going to go back tomorrow and hear another one!"

His point was so convicting for me. And yes, I realize the irony of that statement. Wow, yeah, another great biblical, moving, convicting sermon... but, uh, what am I going to do about it?

You see, I'm getting tired of this lukewarm Christianity that I so often see creeping into my life, and the lives of so many others in this generation who profess Christ. As Francis Chan said, we will face a greater judgment because we have been exposed to greater truth.

Jesus talked about that kind of judgment in Matt 11:21-24, when He says it would be more tolerable for Sodom on the day of judgment than for the cities which witnessed the living truth of Christ himself. In Luke 12:48b, Jesus warned that "From everyone who has been given much, much will be demanded; and from the one who has been entrusted with much, much more will be asked." I, and probably most who read this, have seen and heard much about Jesus. We've listened to compelling sermons, attended Bible studies, accepted sound doctrine, and probably read our Bibles daily. But have we believed? Have we sold ourselves out to this truth we claim? Our spiritually rich environment is only magnifying the judgment if we fail to produce fruit in keeping with repentance.

So what's stopping us? What's stopping me? Fear. Fear of failure, of rejection, of discomfort, of embarrassment. But God says perfect love casts out all fear! If we truly love Him, this will radically alter our lives. 1 John 2:3-6,9-11 states this clearly,


"We know that we have come to know him if we keep his commands.
Whoever says, 'I know him,' but does not do what he commands is a liar,
and the truth is not in that person.
But if anyone obeys his word, love for God is truly made complete in them.
This is how we know we are in him: Whoever claims to live in him must live as Jesus did...
Anyone who claims to be in the light but hates a brother or sister is still in the darkness.
Anyone who loves their brother and sister lives in the light,
and there is nothing in them to make them stumble.
But anyone who hates a brother or sister is in the darkness and walks around in the darkness.
They do not know where they are going, because the darkness has blinded them."
Are we blinded by darkness? I have to think of the many times I've bought new clothes to put in my overflowing closet, when so many families don't have shoes to wear, or the times I've overeaten when millions don't know where their next meal is coming from. I can't help but think of the many times I've kept my mouth shut when I could have proclaimed Christ. I think of the times I've clung to my pride rather than asking for forgiveness. I fail at this daily, but oh how I want to give as God has given to me! By His grace, I can see Him beginning to work this in my life, though it is a slow and painful process.

I think the reason we'd rather go to a convicting message than actually live it out is that real life is hard. It feels really good to have all the right knowledge, to be able to spout it off in "Christian" settings - but when we're at the place where the rubber meets the road, we can no longer depend on ourselves or our own knowledge. It is the power of the Spirit who works in us when we step out in faith, and He produces that supernatural fruit in us. I think of the scripture in Jude 1:12 that warns about those who are like "autumn trees, without fruit and uprooted - twice dead."

I've been reading in James lately, and was so convicted by these verses...

"What good is it, my brothers and sisters, if someone claims to have faith but has no deeds? Can such faith save them? Suppose a brother or a sister is without clothes and daily food. If one of you says to them, 'Go in peace; keep warm and well fed,' but does nothing about their physical needs, what good is it? In the same way, faith by itself, if it is not accompanied by action, is dead." (James 2:14-17)

Which reminded me of this song - which is what I'll end this post with - "Asleep in the Light" by Keith Green. Another convicting tidbit - but I'm praying that this wouldn't just end with a feeling of conviction, but would truly get us on our knees, seeking the Lord for how to live out the grace He's given us in Christ Jesus!

Of Crashing Waves and Winter Sunsets...

I wasn't able to post as often as I would have liked to last month, but I'm hoping I will be able to blog a little more regularly again. My apologies! The past few weeks have been a bit crazy... not super busy, but just an unpredictable schedule. There have been many things to bring before the Lord - many dear friends who are going through trials and much pain. There is this feeling of being utterly powerless and inadequate, of not knowing the right words to say. And through it all, learning to leave everything in God's hands, trusting with everything within me that He will accomplish His good purpose. It's humbling to know that, if He wills, He will even work through my stumbling words. I sometimes feel like a child trying to ladle out tiny cups of water from the Ocean of Christ's love with a cracked teacup, but in reality He is the one whose waves crash down over the highest walls, and in that I can rest and rejoice!

I wanted to take a few moments on this second day of February to share tonight's beautiful sunset with you! I hear the groundhog saw its shadow today, but around here, it looks like spring is on its way. With February's arrival, the skies are beginning to clear, but the clouds that remain catch and throw the rays of the setting sun in brilliant patterns of light and colour.

Without further ado, the promised pictures! 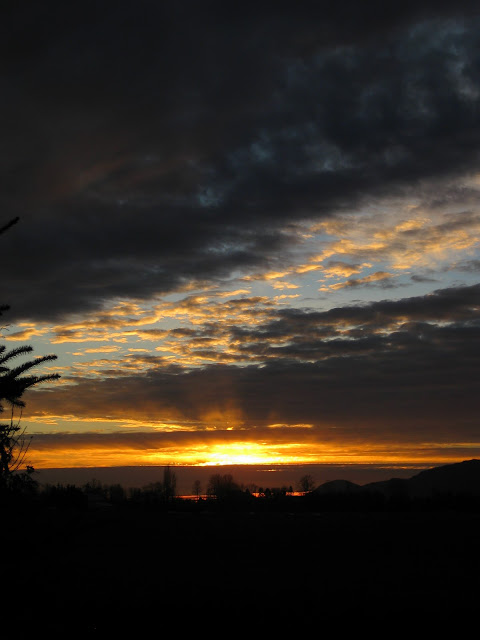 When I first went out on our back deck to take some pictures, the rays of the sun were splendidly diffused through the clouds above. I took several shots before going back inside. 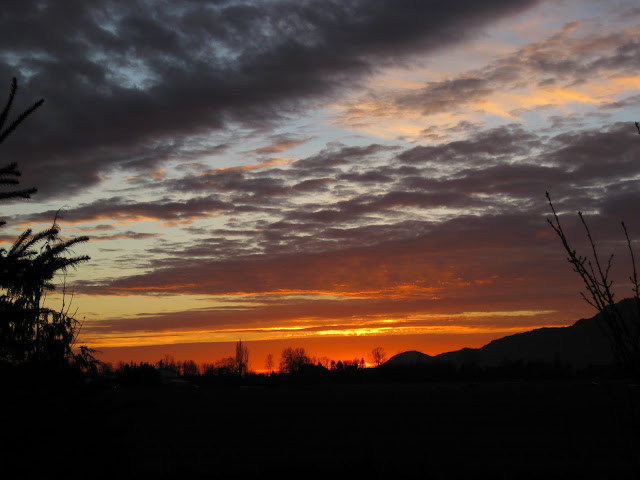 Five minutes later, I turned around and it looked twice as amazing. It was just sneaking down beyond the western horizon, spilling its last drops of molten gold. 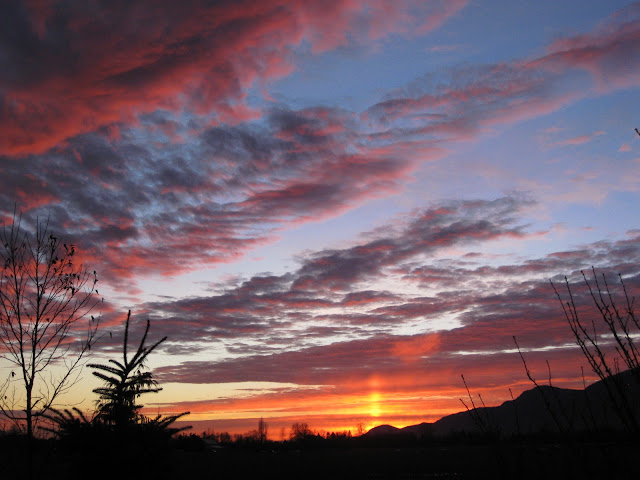 Oh, whaddyaknow! It happened again! Once again I was just inside when the clouds above began to glow with pink and purple light. Out I rushed again to capture the ever-changing majesty. What a beautiful message of God's sovereignty and provision - the very same One who sets the path of the sun is the One who establishes my path! 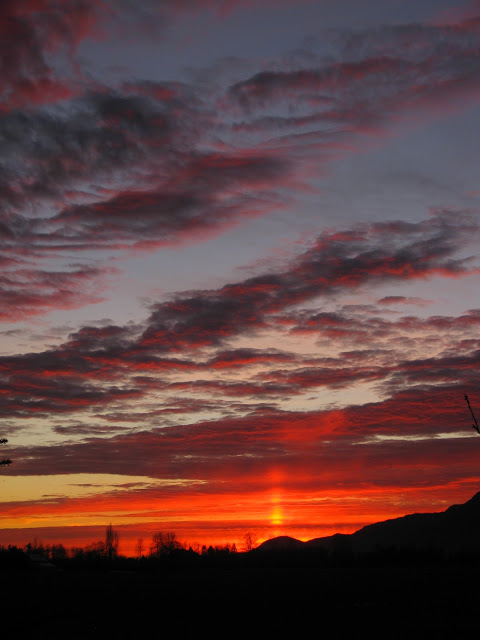 Nina
It is my prayer that this blog would be used of God to be a blessing and an encouragement. Who am I? I seek not to be defined by any material thing, but by the One who first loved me. My destiny is secure as a daughter of the King of Kings, who ransomed me to be His own.